Few names have cast more terror into the human heart than Dracula. The legendary vampire, created by author Bram Stoker in his 1897 novel of the same name, has inspired countless horror movies, television shows and other bloodcurdling tales of vampires.

Though Dracula is a purely fictional creation, Stoker named his infamous character after a real person who happened to have a taste for blood: Vlad III, Prince of Wallachia or — as he is better known — Vlad the Impaler. The morbid nickname is a testament to the Wallachian prince’s favorite way of dispensing with his enemies.

But other than having the same name, the two Draculas don’t really have much in common, according to historians who have studied the link between Stoker’s vampire count and Vlad III.

By most accounts, Vlad III was born in 1431 in what is now Transylvania, the central region of modern-day Romania. However, the link between Vlad the Impaler and Transylvania is 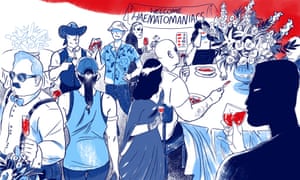 Vampires: ‘We do not identify with fictional characters, supernatural powers, or immortality, nor do we have any difficulty distinguishing between fantasy and reality.’ Illustration: Celine Loup for the Guardian

Drinking blood isn’t what Hollywood makes it out to be, according to real-life vampires.

First of all, there’s no biting – that’s neither safe nor sanitary – and with too many vital arteries, the neck isn’t the favored spot. Transactions aren’t carnages leaving the victim lifeless behind in a dark alley, and nor do vampires sleep in coffins or burn in daylight. They’re generally cool with garlic. Most of them don’t even have fangs.

Instead, modern vampires get their sustenance from inch-long incisions made by a sterilized scalpel on a fleshy part of the body that doesn’t scar. Though the vampire may suck it up directly from the source, medically trained personnel usually perform the procedure. There’s paperwork too: “donors” don’t just have to consent, but also provide health certificates proving the absence of blood-borne diseases. Still, feeding is a sensual and sacred ritual.

The people who claim to be vampires are in the thousands worldwide, with demographics transcending borders, class, race and gender. And increasingly, researchers study them.

“We’re people you pass on the street and likely socialize with on a daily basis,” says Merticus, the 37-year-old founding member of Atlanta’s Vampire Alliance. “We often keep this aspect of our life secret for fear we’ll be misunderstood and to safeguard against reprisals from what society deems taboo.”

An antique dealer by profession, married with two dogs, he’s one of exceptionally few vampires to be open about his identity (“I hide in plain sight,” he explains). For almost a decade, he has personally worked with academics, social scientists, psychologists, lawyers, law enforcement agencies and others on how to best approach, research and understand the vampire subculture.

An Atlanta native, he is known as Merticus both legally and personally – even on his Starbucks card. And while he mostly dresses head-to-toe in black, he doesn’t don colored lenses or fang prosthetics. In fact, he is keen to say he isn’t into it because vampirism is “cool”. Real vampires don’t care much for pop culture buzz, and most don’t look the stereotype (only some 35% of real vampires are into goth, he claims). Some even sneer at the “lifestylers” (also known as “fashion vampires” and “posers”).