If going for a jog every once in a while is good for you — and it is — then going jogging every day packs a whole world of potential benefits, from faster weight loss (or maintaining a healthy weight) to improved mood, more energy and lower risk of chronic diseases. You should, however, be alert to the possibility of overtraining, and the effects of repeated high-impact exercise on your body. 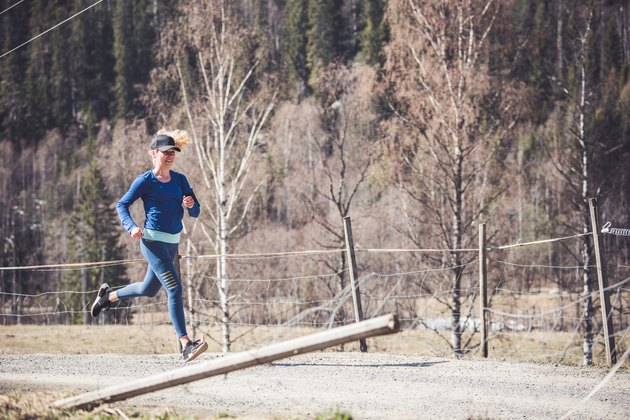 Jogging every day offers numerous health benefits, but be aware of the risk of overtraining.
Credit: Marija Jovovic/E+/GettyImages
Tip

Jogging every day offers a host of potential benefits, including a stronger immune system, better stamina, weight loss, less risk of chronic diseases and a natural mood boost. However, it also poses a couple of potential risks, including the possibility of overtraining.

The Benefits of Jogging Regularly

Health.gov’s Dietary Guidelines for Americans recommends that adults should get at least 150 minutes of moderate intensity aerobic activity each week. If you go for a half-hour jog every day, that’s enough to meet — and even beat — this requirement.

The Dietary Guidelines also notes that doubling the amount of cardio exercise to 300 minutes of moderate exertion each week yields even more extensive health benefits.

So, what’s on the menu for “better health through exercise”? The well-researched benefits of jogging and other cardiovascular exercise include:

Jogging is also a weight-bearing activity that can help you build and maintain strong bones in your lower body, as long as your bones, joints and muscles can handle the repeated impact of each footfall. If you know you have weakened bones or any other condition that might affect your ability to withstand a relatively high-impact exercise, speak to your doctor before jogging every day.

Some of the steps you can take to mitigate the impact of jogging include:

You can also try “water jogging” in the pool, with a flotation belt to keep you above water. This gives you all the cardiovascular benefits of jogging, with none of the impact on your bones and joints.

Read more: The 8 Best Stretches to Do Before Running

A Note for Beginners

If you’re new to exercising, or new to a particular type of exercise, it’s typical at first to develop some soreness — so that is one of the effects you might experience when you first start jogging. The good news is that this type of muscle soreness typically fades within a few days, and as your body adapts to the new exercise the soreness is less likely to come back.

While a little soreness is typical, it doesn’t have to be intense. You can minimize the soreness by taking it relatively easy on your first jogs and gradually

It went well and I had a great time, but in hindsight, I realize the topic I chose was a tough one.

I spoke about the “no-pressure approach” to vegetarianism that I take with No Meat Athlete. Instead of trying to persuade people that they should go vegetarian (and now, dammit!), I’d much rather just set an example that people can choose to follow or learn from if they’d like. I’ve just never been one for confrontation, and I hope my writing here reflects that.

But after I was done speaking, I thought to myself: Boy, that would have been so much easier if I had just talked about the same stuff I write on the site.

And so I got to thinking — what’s the gist of my message?

That’s when I got the idea for a series of posts that I should have written long ago. This is the first post in that series, the heart of the message I want to spread about vegetarianism (future installments will be about running and healthy eating, I think).

And as it turns out, it’s pretty much a demo of what I talked about in NYC. So that works out. 🙂

“Should” you go vegetarian?

I’d be lying if I said I didn’t want you to go vegetarian or vegan. Compassion for animals was big part of my reason for doing so, and so I’d love it if nobody ate them.

But I’m not going to tell you what’s best for you. That’s for you to decide.

Is a plant-based diet healthier than an omnivorous one?

I believe I’m a lot healthier now that I’m vegan. It forces me to avoid fast food and countless other convenient, but unhealthy, foods that I used to eat. So in my mind, there’s no question that a well-planned plant-based diet is healthier than the standard (terrible) American diet.

But how about compared to a whole-foods diet that happens to include a small amount (say, 10% of calories) of meat, maybe a little dairy? Honestly, I’m not convinced that one is clearly healthier than the other.

There’s a lot of science that says a plant-based diet is better. And there are plenty of people who claim that this science is bunk.

To me, it’s not clear that one diet is necessarily healthier than the other. I’m fine to call it a tie. I just know that passing up a McDonald’s is way easier for me now than it was before I was vegetarian, and as a result, I make so much more of my own food than I used to, and eat so many more fruits and vegetables than before. For that aspect, I like it.

Is a plant-based diet better for sports?

I got faster when I went vegetarian, so much so that I took over 10 minutes off my previous marathon and qualified for Boston on my first attempt after I changed my diet.

But I also changed the way I trained, so I can’t say for sure how big a role each change played. I can say that I lost 5-10 pounds when I went vegetarian, and I believe that was a huge factor in getting faster.

Awesome information for those of you who wish to answer to the call of the Morrigan.

Do you do yoga?

Tarot and Torch: A heart on fire

A collective project of multiple witches from different practices, places, and modes of life coming together to create a collective beginner, intermediate, and advanced online archive/Book of Shadows to assist you in your witchcraft way.

For my ancestors, for the earth.

Witchy dreams from the moon!

Finding my way from employment to retirement

Look into our mirrors...You will see the most amazing things...